When is enough money enough? 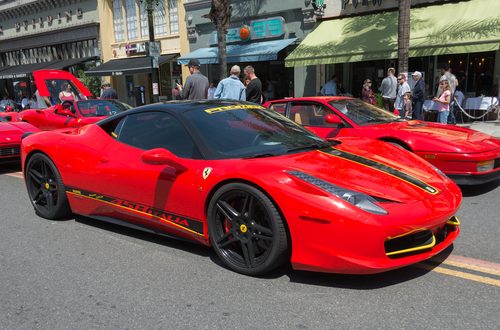 The Ferrari and the rich kid

Despite having 15 luxury cars already in his possession, the son of a Swiss multi-millionaire was so intent on upgrading his collection he devised a scam to claim another model on his insurance.

The unnamed 20-year-old, who was said to have become bored with his Ferrari 458 Italia, (similar to the one shown, left) has been convicted of deliberately setting fire to the $317,000 car, along with three other accomplices.

The idea came about when the young man realised he would get a lot less for the car than he had hoped, after a valuation put it at just $261,900.

He was then advised by a local car dealer to commit insurance fraud which prompted the pair to plot together, with the dealer recruiting an accomplice from his garage to help.

In order to create an alibi, the car’s owner went with a friend to a massage parlour in Augsburg, Germany, where he lives part time, leaving his accomplices to set fire to the car for a payment of around $20,000 each.

But unbeknownst to them, security cameras recorded the crime and the plotters were arrested when they returned to Switzerland, the Daily Mail reported.

The wealthy businessman father of the Ferrari owner paid his son’s bail, which was set at just under $300,000.

During the trial, the young driver also revealed he still received an allowance of between $6,700 – $13,700 per month from his father.

He also owned several properties totalling more than $35 million and 15 cars including a Lamborghini. All the vehicles were paid for by his father.

The young man told the court that at the time of the offence he was low on cash but did not have the courage to tell his father that he had become bored with the Ferrari.